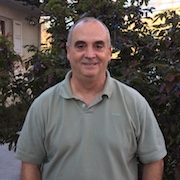 Chris first experienced indigenous forms of healing with an elder of the Hmong people of Southeast Asia in the early seventies discovering his gift for the Art of healing. He turned this gift for energy healing that was conterminous with further travels in several countries on three different continents working with other indigenous healers. Later he found himself working on friends and associates while living on an organic, Bio-Dynamic farm modeled on the work of Rudolf Steiner for several years in an Intentional Community. Many of his friends in this community had shared spiritual practices from their association with the naturalist, author, and tracker Tom Brown.

In the late nineteen nineties he turned his attention to Breema bodywork studying with Malouchek Mooshan, and with Dr. Jon Schreiber as it was developed into its comprehensive and philosophical Art in Oakland, California. While Chris no longer practices Breema, because of a bothersome knee, he has adapted the Breema Principles into his bodywork practice. After experiencing the benefits of Breema for Health and Wholeness, Chris took up an apprenticeship in the Bay area studying various forms of massage. Afterword, he attended the beloved Scherer Institute in Santa Fe, and later did more advanced studies at the Boulder College of Massage Therapy.

His work now is directed at chronic pain issues and limited range of motion disorders, but he blends numerous techniques into every session that is uniquely crafted for each client. His major bodywork modalities are NMT, a blended form of Massage using a host of techniques adapted from many different cultures, Reiki, Healing Touch, Sports, Positional Release, to name a few. Chris is also certified in the Erik Dalton method.

Like the axiom tells us, “do what you love and you will never work a day in your life,” Chris has a passion for healing and bodywork methods that promote good health and ease of movement. He has a deep love and passion for working with the most difficult cases to promote wellness in the lives of those he serves.